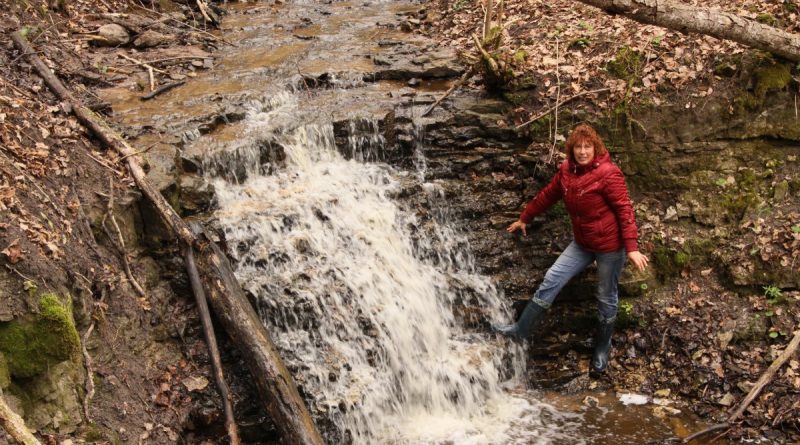 Virsaiši waterfall was selected as the geological object of 2010. It is located in Courland, Talsi County, the rural territory of Abava, in the tributary of Virbupe River right bank, near the Virsaiši house, from the Stende-Sabile road and the turn to the nursery garden Mazsili.

Virsaiši waterfall is 1.7 metres high and it has formed in a stream-bed across the rocks of upper devon dolomite. The waterfall is particularly vivid in spring and autumn when its width reaches 4 metres. The waterfall was only discovered in 1998, but from 2001 it has state protected geological and geomorphologic nature monument status.

You can enjoy a nature trail that has been market with a red colour. It is perfect for a small hike. There are signs at the beginning of the trail and at the turning points as well as a stand at a comfortable rest area near the waterfall.

If you complete the whole trail, you will be able to see the shelters of beavers. The length of the trail out-and-back including all the turns is approximately three kilometres. This nature trail is perfect for families with children and for elderly travellers to enjoy a leisurely stroll.

Virsaiši waterfall is located in a deep side ravine of Virbupe River, where you can enjoy a nature just slightly altered by the civilizations– the stream is purling through the dolomite, there are rocks in the steep banks of the river and trees that have fallen on their own or because of the wind; however, there are not that many trails.

Geology Museum of University of Latvia, North Vidzeme Geopark, Talsi Country Council and Talsi tourism information centre supported the nomination of Virsaiši waterfall as the geological object of 2010, which was organized by Petroglyphs Centre of Latvia.